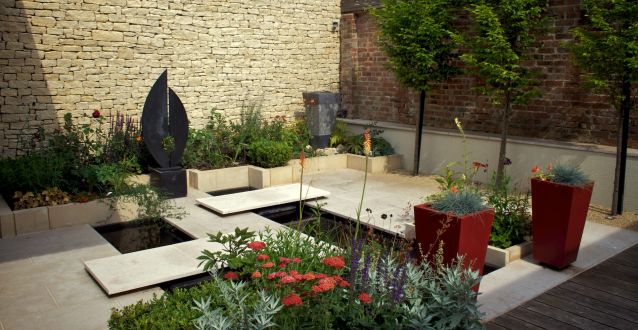 The British Association of Landscape Industries has announced the winners of the 2014 National Landscape Awards and I was absolutely delighted to be told that I have been awarded the Design Excellence Award (under £50,000) for my design for the garden at “The Orchard House”, a garden with a strong narrative built around a contemporary architect designed house in an historical site.

The Orchard House garden was inspired by the discovery of Oxygen in 1774 by Joseph Priestley who lived at the site.
Oxygen, an essential component of Life on Earth, weaves through the garden in the form of bubbles, symbolic of Priestley’s invention of Soda water.
At the entrance to the garden, at the site of the former Pig Stye, is the Oxygen Garden. The planting, which will surround a dramatic Oxygen scuplture, reflects primitive plants and those being brought to cultivation by the great plant hunters of Priestley’s era.
The garden then moves on to the Orchard, one of the older examples of humans taming plantlife. Here, lines of Box “bubbles” punctuate the grass in a clear display of the human desire to control nature.
The garden then passes through a modern hint of a traditional knot garden, before arriving at the Inner Courtyard, a highly contemporary Water Garden.
The Water Garden is a calm reflective space to be viewed from the house or to sit within, with lighting creating a beautiful scene for evenings. The style here is more linear, with Box cubes softened by loose planting of modern plant cultivars.

The garden is wheelchair accessible, without being obviously so. There are several practical features and the garden has been designed to look good from a slightly lower angle of view.