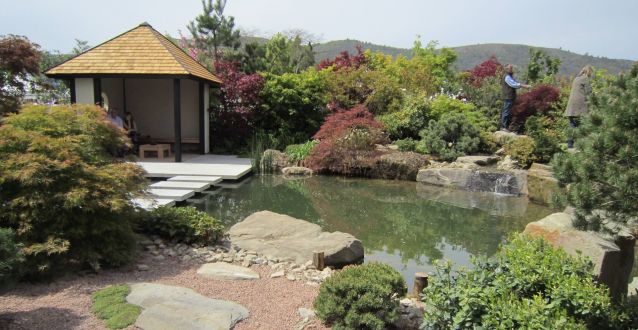 It’s Chelsea week, but I’m going back to RHS Malvern Flower Show a few weeks ago. One of Malvern’s top attractions is probably all the nurseries selling plants, something you don’t get at Chelsea. I have just finished making a series of terraced beds for alpines, which have held a lifelong fascination for me, so came away with a good selection of plants to get it started. The first stand we visited was Border Alpines who had a great range of plants at very good prices because they sold in 8cm pots. Very often it isn’t necessary to go for 2L or 3L pots unless you are after a quick effect, as the smaller plants will soon establish.

Malvern does have a good number of show gardens, though nowhere near as many as at Chelsea. The Macmillan Cancer Support garden “A Lasting Legacy” was charming and thought provoking. Aimed at raising awareness of the value of leaving a legacy in your will, the garden attracted a lot of interest and the volunteers were great at explaining the thought behind the garden.

One of the most impressive gardens was “A Japanese Reflection”. This garden, a large Japanese water garden, had some beautiful individual plants – free standing Wisteria, Pines, Acers and a delightful Peony. It used stone in three different forms – boulders, chippings and sawn paving and stepping stones. However all three were a very different colour which for me spoilt the overall serenity of the garden. Interestingly, at Chelsea this week Cleve West’s garden also uses boulders which are a rusty beige colour and sawn stone which is blue-grey. In an interview he explained that surprisingly this is actually the same stone, which looks very different weathered and sawn. It wasn’t a look he particularly wanted, but the integrity of using the same stone was important for his garden. The Japanese Reflection garden may well have used the same type of stone and found the same issue, although the third colour of very pinkish chippings is definitely one too many for me. With hard landscaping materials, a far stronger more cohesive effect is achieved by keeping to a very limited palette – “Less is More” as architect Mies van der Rohe said in 1947.