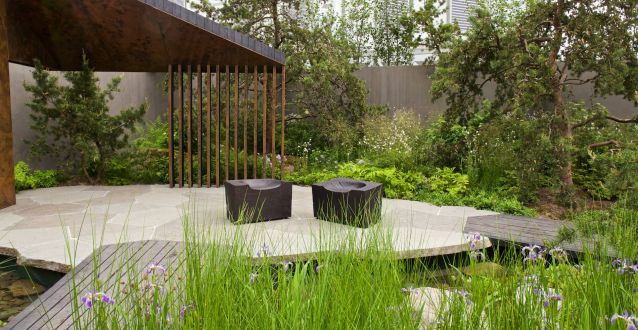 This year’s Chelsea Flower Show was something of a disappointment from a design perspective with very few large Show Gardens (thought to be due to Brexit uncertainty putting off sponsors). It did however prompt the new Radio 2 Feel Good Gardens, which were a triumph even before you factor in how little time they had to be conceived and built. I thought the Texture and Listening gardens of this group were particularly innovative.

Back to the main Show Gardens, it was no surprise that Chris Beardshaw’s garden won the People’s Choice award (again – he has quite a knack of appealing to real people!), as it was the most flowery “gardeny” garden and very beautiful. Many others were predominantly green and wild, some far too wild to really be a garden at all. The Welcome to Yorkshire Garden wasn’t a garden but a piece of Yorkshire landscape, which was reflected in the medal. Although the designer claimed that there were plenty of parts that could be used within a real garden, I think it is the garden designer’s role to reinterpret whatever inspires the garden, in this case a wild landscape, into a garden and not just to take a piece of landscape and plonk it in a garden as is (how many of us really have seaweed and waves lapping in their garden?). Charlotte Harris did a far better job in her gold medal winning garden (above) using the Canadian wilderness as inspiration to create a beautiful useable garden – my personal favourite.

What was interesting was that the Best in Show in both the Show Garden and Artisan Garden categories were gardens made within reclaimed landscapes. The first a garden, including swimming pool, within a former Maltese quarry, and the latter turning a derelict industrial wharf into a relaxing useable outdoor space. Clearly a worthy concept that resonated with the judges.