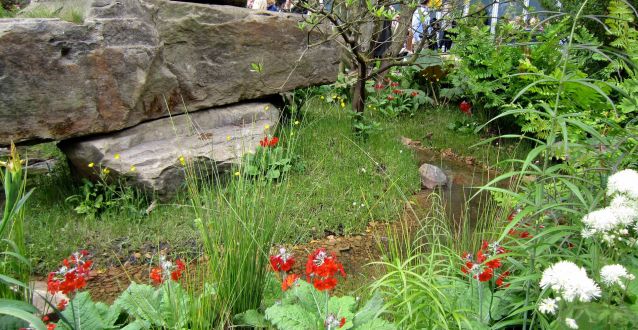 What is interesting is that both are capturing a similar essence – that of slight abandonment of a cultivated space where the lines between garden and wild landscape become blurred. I love this sort of atmosphere but I know it’s not everybody’s taste, not least from some of the puzzled comments I heard around me from other people viewing particularly the Chatsworth Garden. I’m guessing that, whilst Dan Pearson may well have got the coveted “Best in Show”, he probably won’t get the “People’s Choice” award. It is, after all, not a garden that can easily be adapted to suit most people’s back gardens.

What is it then that these 2 gardens have got that made them stand out? Both have the power to transport you somewhere else, not by appearing as a stage set but by the atmosphere they evoke. Looking at the Perfumer’s Garden, I could believe that I was in the South of France (helped no doubt by the sun coming out) – the stone was perfect, the gentle flowing water, and of course the oh so inviting table and chairs below the olive trees. And if I could have lost all the crowds, I could happily have spent the afternoon wandering around exploring amongst the rocks of the Chatsworth Garden.

The execution is of course impeccable, as with most of the gardens. When you think about what’s involved in creating these gardens on site in just a couple of weeks, that’s when you really have to admire Dan Pearson’s team in particular – the garden, covering a far bigger area than any of the other show gardens, simply looks like it has always been there. That level of detail shows extraordinary planning and an understanding of how plants grow and settle into their surroundings over time, not to mention the sheer logistics of transporting and successfully arranging 200 tonnes of rock from Chatsworth (and then taking it all back there again after the show!)