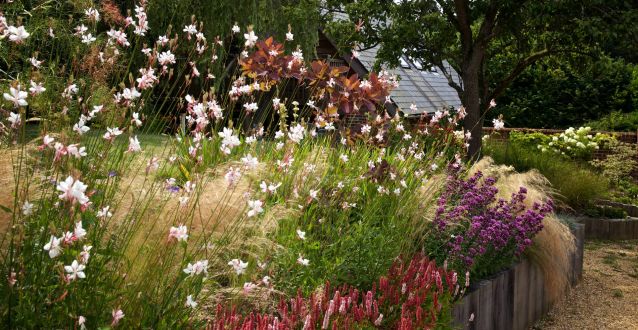 August is often cited as a difficult month in the garden, when the majority of Summer flowers are fading but before the late Summer/Autumn prairie style plants get going. There are of course plenty of plants that do look good in August and it is possible to plant a border ensuring that in every month, even Winter, there is something flowering or with attractive foliage, or some other feature of interest. But is this the best way to go about it?

Taking this approach can result in a garden which always has something of interest, but never really wows because the effect is diluted. Somewhat counter intuitively, it is often best to decide on a key season and concentrate on plants that look good then. In another part of the garden, you can concentrate on a different season, and so extend the season of interest by effectively moving the focus around the garden. Obviously it depends on how big your garden is as to whether you can indulge this approach fully!

A very natural seasonal approach follows the sun. Plants for shadier parts of the garden often peak in Spring, because those that come from woodland settings tend to flower before the tree canopy leafs up. Plants from open prairies like grasses, Heleniums (see October 2014) and Echinaceas flower late Summer and are well suited to sunny borders.

Some plants are very long flowering and can do a great job of extending the season of interest – Gaura (not long lived as it tends to exhaust itself flowering all Summer long!), Persicaria affinis and ornamental Origanum shown together in the picture above flower for months.

Having decided the key season to focus on, that’s not to say you have to sacrifice any interest for the rest of the year. Think about plants with attractive seedheads, or autumn foliage and berries for example to give a different look later in the year. Considering not just flowers but also the shape of the plant and its foliage will mean that even when there is no flower there is still an interesting mix of forms and textures.