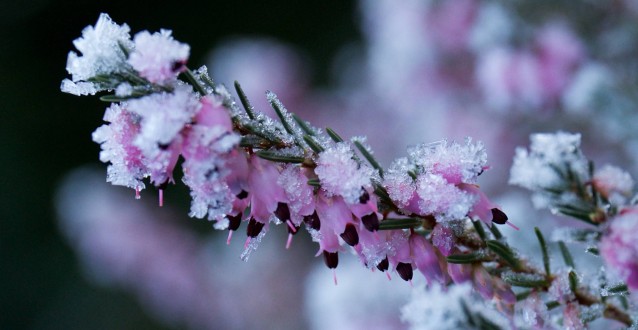 The idea for this blog came when I noticed just before Christmas a Cirsium flowering in my garden. Cirsiums are favourites at Chelsea because they can usually be relied upon to be flowering in May, but here it is flowering in December and January! They are actually one of those plants that has it’s main flowering period (May) but then will often flower sporadically later in the year (usually not much after October though).

It made me take a look around my garden to see what else was in flower, bearing in mind none of it has been specifically planted as a “winter garden”. Very often winter interest consists of other features such as attractive evergreen leaves, stem colour, berries, interesting bark, architectural form etc, but if you look around you’ll see that there are quite a few plants in flower.

Unlike my Cirsium, some are meant to be flowering now; it is their main flowering season. Such plants will often also offer a heady perfume to attract pollinators from far and wide as there isn’t the quantity of pollinator traffic that can be relied upon in Summer. These include Sarcococca or Christmas Box, a very useful evergreen that will even thrive in difficult situations such as dry shade. As it happens though, mine despite the name implying they should have been flowering at Christmas, are only just starting to open so their perfume isn’t yet filling the garden.

So back to that list of what’s flowering here right now:
* Winter flowering heather Erica carnea – a bit out of fashion these days but every Winter I’m struck by what a fantastic long lasting display of pinks and whites they give.
* Christmas Box Sarcococca spp. – the flowers are inconspicuous to look at which leaves visitors wondering where the amazing scent is coming from.
* Snowdrops Galanthus nivalis – a bit early yet but the first few are opening.
* Primroses Primula vulgaris – definitely early as March is their prime time, but it is quite common for some plants to start flowering as early as November.
* Winter aconite Eranthus hyemalis – Just beginning to open their bright yellow flowers. Small and slow to establish, but well worth the wait to have something so cheery this early.
* Winter flowering Clematis Clematis napaulensis – a climber with small scented greenish white flowers with purple stamens. It is unusual in that it is in leaf in the Winter but by Summer has lost its leaves and become dormant.
* Witch Hazel Hamemelis x intermedia ‘Diane’ – this variety has rich red flowers on bare stems just starting to open. It seems a bit earlier than my other yellow flowered varieties.
* Holly Ilex aquifolium – in berry at the moment, but when picking stems for Christmas decorations I noticed that some other Holly plants currently had white flowers on rather than berries.
* Rose Rosa Flower Carpet – roses will sometimes have spasmodic flowers late in the year, though the large truss of bright pink flowers that only opened last week is a bit unusual.
* Brook Thistle Cirsium rivulare ‘Atropurpureum’
* Parahebe ‘Snow Clouds’ – this has been flowering pretty much all year and there are still just a few clear white flowers.
* Cyclamen coum – small but exquisite cerise pink flowers.
* Strawberry Tree Arbutus unedo – this is famous for bearing it’s beautiful spherical fruit at the same time in Autumn as it flowers – the fruit have long since been eaten by the Blackbirds and the flowers have mostly finished now, but there are still a few.
* Elephants Ears Bergenia cordifolia – flowers properly a bit later but sometimes throws up a few early flowers though these may then get hit by frost.
* Rosemary Rosmarinus ‘Miss Jessop’s Upright’ – it may seem a bit odd for a Mediterranean herb to be flowering in Winter, but this is another sporadic flowerer and it has quite a lot of pale blue flowers at the moment.
* Purple sprouting broccoli – Ok so this is in the veg garden, but the bit we eat is actually the flower and it’s producing its purple florets right now.
* Hazel Corylus avelana ‘Contorta’ and ‘Purpurea’ – the catkins of several trees are developing now, those of the twisted hazel are green whilst those of the purple leaved Hazel are red.

Before long there will be several more of the classic Winter flowers such as Mahonias, Camellias, early Daffodils and Crocuses (Crocus tommasinianus very nearly made it onto the the list above), Hellebores as well as more unusual flowers, but the ones above that are flowering right at the very beginning of the year are a pretty good start!

Categorised in: Plant of the moment