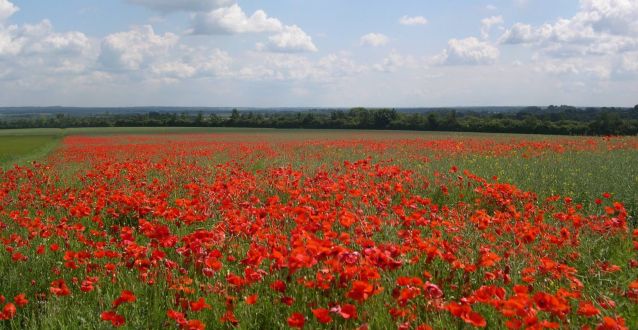 Previously beautiful countryside in Western Europe was blasted, bombed and fought over during the First World War (1914-1918). The landscape turned to fields of mud where little could be expected to thrive. Bright red poppies (Papaver rhoeas) however grew in their thousands, appearing unexpectedly amidst the chaos and destruction. Poppy seeds can lie dormant in the soil for over 80 years before germinating, which is usually triggered by disturbance of the soil such as ploughing.

The contrast between the horrendous sights of the battlefield and the following flush of poppies, as if healing the broken land, inspired Canadian volunteer medical officer Lieutenant Colonel John McCrae to write his now famous poem ‘In Flanders Fields’ in 1915. The poem in turn inspired an American academic, Moina Michael to make and sell red silk poppies which were then brought to England by a French lady, Anna Guérin. The (Royal) British Legion, formed in 1921, ordered 9 million of the poppies which were sold on 11 November that year. The poppies sold out almost immediately and the large, four-petalled, scarlet flowers of the common poppy have been adopted as a symbol of remembrance ever since.

The association between poppies and the cycle of life has an even longer history. This association is partly due to the fertile nature of the plant – a single plant can produce up to 60,000 seeds. It is also a result of the association of poppies with crop plants, and the yearly cycle of sowing seeds and reaping the harvest. Poppy seeds have been found mixed with Egyptian barley grains from around 2500 BC, and poppy seed heads were often associated with corn in images of the Roman crop goddess Ceres. It seems likely that the common poppy, which is thought to be native to the eastern Mediterranean region, was introduced to northwest Europe in the seed-corn of early settlers.

The flowers have been used in treating mild pain caused by earache, toothache and neuralgia, and an infusion of the petals was traditionally taken for coughs, insomnia and poor digestion. Poppy seeds have a nutty taste and are used as a flavouring in cakes and bread, and the seed oil is highly esteemed in France and elsewhere. The petals are a source of red dye used in some medicines and wines, and dried petals are occasionally used to give colour to pot-pourris.

Categorised in: Plant of the moment